Santa and the Bitcoin Hangover 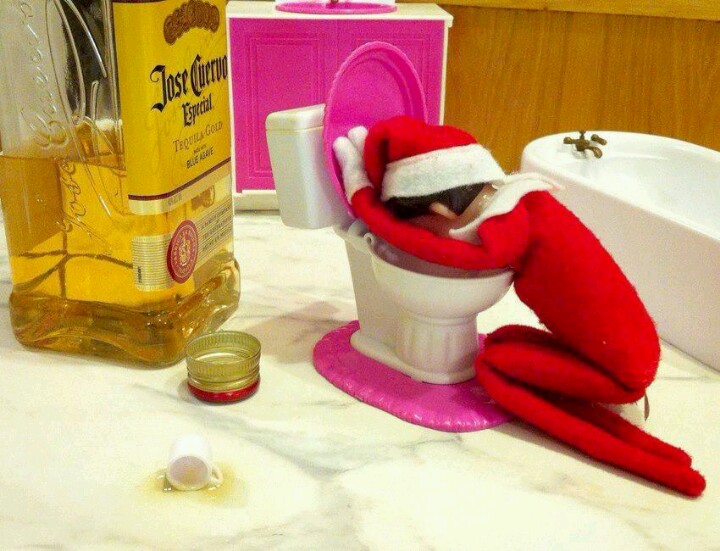 The way Christmas unfolds in Ireland seems to bring conflicting emotions with it. We, like most parents, like to bring some “magic” to the occasion for our children, but it’s a real struggle to do this without feeling like one is on a slippery slope of wanton waste and mindless consumerism. Having been out of the country for several previous Christmas periods, this year we were exploring how we wanted Christmas to feel in our home. It started well with some intentions to engage the kids in some acts of giving each week in the run-up. We didn’t want them to start believing the whole thing is just about the gifts and “what’s Santa bringing you?”.

The amount of times well-wishers will ask kids this question during December is staggering and somewhat irritating. How could children who hear this refrain repeatedly, think about anything else other than their list of stuff and what they are entitled to?? We seem to be hell-bent on spending a month every year teaching them to want things!! Toy companies must be so proud of how well we’ve all bought into this!

Anyway, in the end, we got suckered in; we absorbed the “Late-Late Toy show”, visited more than one “winter wonderland experience”, bought the “Elf on the Shelf” and had our vague good intentions swept aside, and we pretty much signed up for the whole consumerist shebang. Plastic battery operated toys were purchased in spades based on the aforementioned critical Santa “list” and our Christmas morning turned into a whole lot of stuff strewn about the house with the kids obviously confused by the quantity and what to do next with it all. It doesn’t take long before this is the norm and expectations are set for future Christmas’s to come. 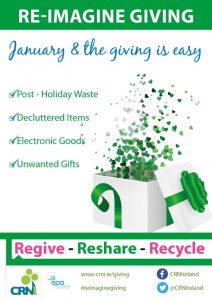 We did at least try to use fabric to wrap the stuff under the tree which worked well, but there was no doubt that the whole event was too much about the purchases despite some vague earlier intentions to inject some other values into the occasion and try to give it a broader meaning. The whole idea of teaching kids to be good so that they can get more stuff from Santa on Christmas day seems like such an outdated lesson to giving our children. What natural conclusions would young minds draw from this as they see it played out year after year at Christmas time? It’s a very self-interested and greed-inducing message to give. Isn’t it time we moved on from this?

Something that struck us as we look back on Christmas 2017 is that if you want to do something a little different with the occasion, then you really have to know what you want to get from it and be proactive in your efforts to go after it. Somewhat unclear intentions of trying different things may get overwhelmed in the surge of messages that bombard us all. In a small country like Ireland, “the way things are done” can be a powerful current to swim against.

The Community Reuse Network of Ireland is running a campaign in January which encourages us to re-gift and pass on the unnecessary stuff we have accumulated. Hoarding stuff that we don’t need or use is a sure way to clutter your life. It’s wasteful too, at a time when the world is producing too much. This campaign is encouraging people to “Think a bit differently about January and see it as a month of giving back and decluttering – giving unwanted presents to charity shops, sharing decluttered items on Free trade sites and recycling any unwanted holiday waste and electrical goods”.

Note that the Babymarket.ie is continuing to offer a great way to sell your used child-related items and to help new parents to save some money. 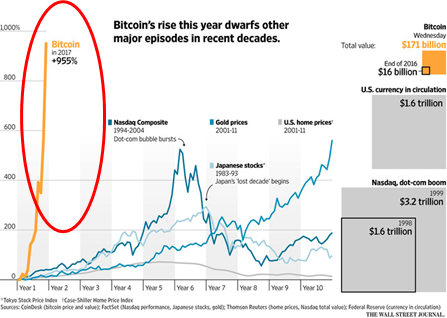 We also spent the month of December (and November, and October…) glued to the price of Bitcoin. It’s a digital currency or “cryptocoin” that has been in operation since 2010 and has recently become more widely known.

You may have seen the news stories late last year as this niche technology captured much wider interest and began to be covered extensively in the media due to its massive gains in value (see the plot shown indicating the exponential rise in value that took place as compared to other asset bubbles).

Having followed it for a few years we decided to buy a very small amount of Bitcoin in September 2017 and were fortunate to experience some of the recent massive surge in value it experienced last year. Huge levels of new interest in this digital currency with only 16 million units in circulation, led to a price increase from approximately $3500 per coin in September to nearly $19,000 in December. It has since crashed back down to $8,000 though and still dropping. But such are the dizzying highs and lows of crypto-coin speculation.

It is interesting to watch the varied commentary when something like this happens. On the one hand, there are those who have bought into this vision of the future and see Bitcoin (and other cryptos) as a future “currency of the people” and say it will soon be worth hundreds of thousands of dollars per coin. A universal currency that is not controlled or manipulated by banks or governments has a certain appeal for lots of reasons.

On the other hand, there are those who represent the established banking industry or government regulators who are making dire predictions of a total collapse of this absurd speculative bubble based on a meaningless creation.

The truth about Bitcoin and other digital currencies is probably likely to be somewhere in between these two extreme predictions. There is enough interest in the technology that there seems to be no doubt it will survive in some form.

As with all disruptive technologies, there are incumbents who are unsettled by its potential and have much to lose when their own industry is threatened…i.e. bankers and government regulators. While those first movers who believe in the technology will vastly exaggerate its potential in order to drive others to get on board.

The argument that Bitcoin is in reality worthless seems strange as, so are all currencies (pieces of paper after all) except that governments back them and give them value. Hence you know your paper Euro has value, but we also know what happens when governments collapse and currencies devalue extraordinarily as is currently happening in Venezuela. This does happen and suddenly a currency can become near worthless when the trust breaks down.

As something like Bitcoin gains acceptance then it will of necessity gain intrinsic value from those who believe in it and are willing to transact it and assign value. The problem, for now, is, of course, its volatility. It’s getting harder for people to sign up to use it when its price is moving by so much and so quickly.

The counter-argument made in favour of Bitcoin is that while unlikely to replace regular currency, it represents a new way to store value in the place of gold. Not that many of us tend to buy gold these days to store value, but you get the idea. If Bitcoin can be readily purchased by anyone with a pc and stored safely (this may be an issue) and it keeps or grows in value over time, then it represents an improvement over gold.

The obvious comparison to make here is to the buying of company stock. When you buy stock in a company, you are investing in the future growth potential of that company. So when your investment goes up, is it because some tangible economic value has been delivered by the people in that company and so you are sharing in the increased company worth as your stock goes up. This doesn’t really apply to the crypto asset class, however, as there is currently no obvious intrinsic value to use in order to figure out if its price is reasonable or which direction it’s likely to go. Hence it is for now pure speculation and everyone buying it is hoping that they are not the last buyers. Hence it is very very volatile and very unpredictable, but this is not unusual for such a disruptive new technology.

It is certainly an interesting phenomenon that is in the very early stages of its development. We have decided to ride out the volatility with our little investment to 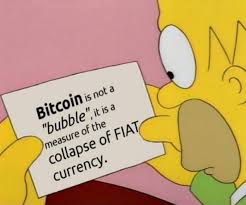 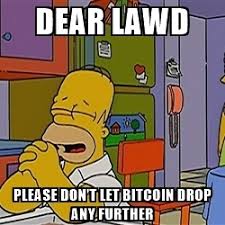 see where this all goes. Remember the Internet in the late 90’s when many apparently silly ideas with a “dot com” attached to their names would surely change our lives dramatically in the future, and these ideas were driving massive speculation in stock markets prices. And then it all burst in the economic crash of 2000. With hindsight, we can now see how that has played out after all the crushed dreams and silliness are gone.

Yes, it was a bubble, but yes the technology did change the world dramatically once people figured out the true value in it.

There may be something to this Bitcoin thing.

But then the hangover set in..