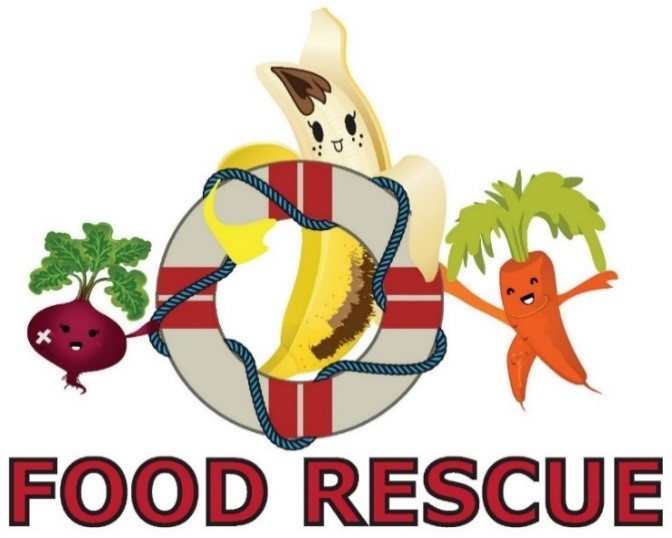 Can you believe that estimates suggest that we are throwing away something like 30 to 40% of the food we produce globally! Amazing, when you consider the efforts that go into the use of chemicals and methods to enhance crop yields in order to boost production. It seems that there is way more food produced than we need to feed everyone if we stopped throwing so much of it away.

We wanted to share our experience with food waste reduction and our very first Food Rescue event!

As we’ve shown here, we started paying attention to our plastic waste and one thing leads to another and now we’re starting to keep a close eye on our food waste at home too. With 3 kids this can get out of control if one isn’t paying attention and it all part of wider intention to reduce our own waste and impact as much as we can.

Mrs Makedo recently became chairperson on the local primary school parents committee which our eldest girl attends. The main job at hand is to raise funds for the school. Traditional routes for fundraising seem to be hitting up businesses for raffle prizes, hitting up the locals for raffle tickets and hanging around outside the local church with a sign to hit up the churchgoers. These methods have been tried and tested and still work, but some new approaches could help the energy levels all round.

In a nice convergence of our waste philosophy and the need to raise funds for this new role, we got down to planning our first Food Rescue to raise some funds for the school.

If you haven’t heard, a Food Rescue is an initiative by Voice Ireland, an environmental group based in Dublin who ran the popular Feeding the 5000 Event.  These events sprang from an acknowledgement of the huge volumes of food waste we generate. In particular food sellers are obliged to remove produce that is beyond the best- before date, but which is still perfectly fit for consumption. Similarly, funny looking veggies that are deemed too ugly to sell (in our world where appearance means a lot) can be rescued from the bin. Organizing an event where this food is rescued and used to cook up a tasty meal and bring people together to share it is known as a “Food Rescue”. And its purpose is to highlight the issue of food waste while using up some fine unloved produce to 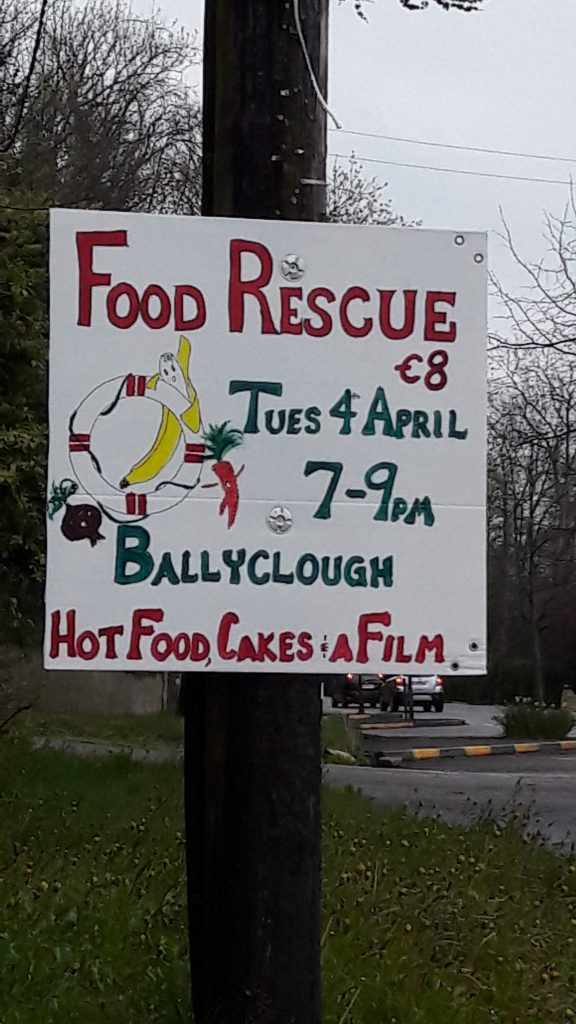 Mrs Wemakedo worked with Voice Ireland and put in several weeks of planning for the event which was held in our local community Hall on April 4th. A local high end restaurant chef (from Longueville House) was recruited to do the food preparation before the event. And we spent a few evenings handpainting some signs for advertising.

We did lots of cold calling supermarkets to see what sort of waste they have and how they could help, until we figured out that Food.Cloud have got this whole process streamlined to perfection. They have an extensive network throughout Ireland and have connected to all the supermarket chains to collect waste and find ways to use it through charities.

We found when we contacted them that they were ready to help in any way. They can source almost any kind of food at short notice and deliver to you for cooking – fantastic! Lots of successful Rescue events have been organized across the country for many years now so it’s a brisk business and one that appears to be having a great impact. People seem to know about this supermarket waste issue now. Household waste is a more personal problem and one that we can all probably do better with.

To add some variety to the event we included a viewing of the movie “Just eat it”. A very entertaining documentary about a couple who opted to live on waste food for 6 months, only spent $200 on food over that period and rescued about $20,000 from dumpsters. It has some very funny moments and is well worth a watch! We had a great response to this and people were very happy to sit through the 50 minute version. 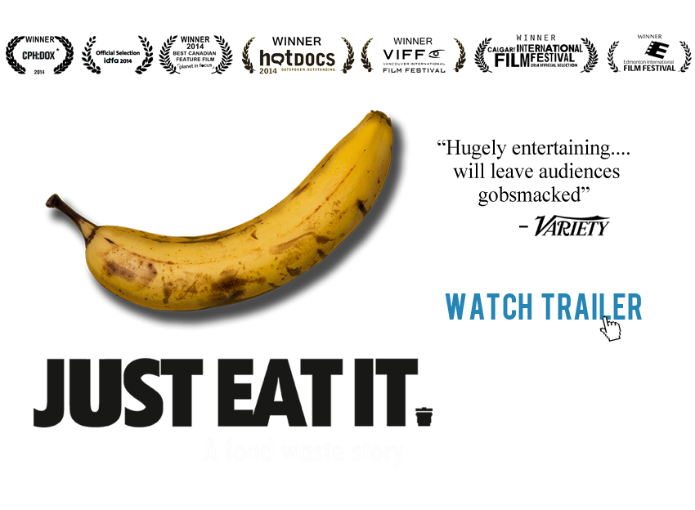 We also invited local composting expert Donal O’Leary from www.stopfoodwaste.ie along to talk to people about how to use food waste in beneficial way through composting it for your garden. He spent 30 minutes explaining all the reasons why keeping food out of landfill is important and the tricks to make it work for your garden.

The night went off really well.

Tons of super volunteers cooked cakes, provided tea/coffee to accompany the (rescued) main course and dessert and helped out with serving and clearing up. We had rescued biscuits, cheese and crisps also laid on. With an €8 charge on the door, the night attracted 80 or so guests and €600 euros was raised to help the school. We even had 2 couples attending who wanted to organize their own Food Rescues.

The Rescue idea has huge potential and with this first trial run, the hope is to make it an annual event. We were a little cautious with the food this first time round, but having seen how it all works and the excellent message it gives, we would hope to go much further with the rescued food on offer in future. 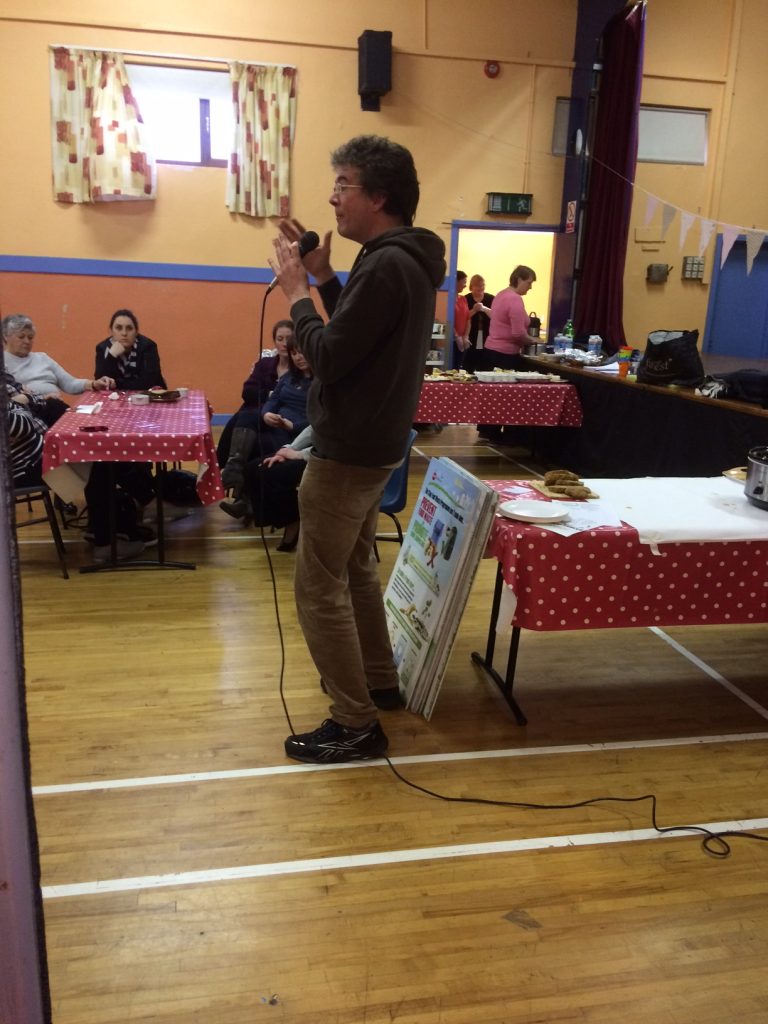 We were so busy on the night that we only took 1 picture.  Here it is!

And if you’d like to organize your own Food Rescue, simply contact Mindy or Meaghan from Voice Ireland, and they’ll send you everything you need to get started!