A Letter To AerLingus Customer Service 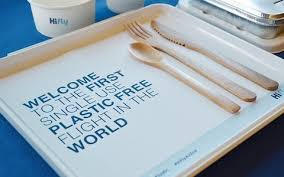 To whom it may concern at Aer Lingus,

I recently used your new transatlantic service from Dublin to Seattle and I found the service to be very good, in keeping with what I have come to expect from AerLingus as Ireland’s national carrier and a 4-star airline.
However, I am writing to highlight one aspect of your service that I was very disappointed with.

That is the amount of consumer plastic waste being generated on each crossing on this route.

Here is will highlight some specific areas that I noted on the flight which could be easily addressed and then I will finish by proposing that AerLingus has an opportunity to take a leading stance in improving on the waste generated from its inflight service when other airlines seem to be ignoring this very “front of house” and sadly very wasteful aspect of the service.

Firstly the travel blanket supplied to each customer is wrapped in a plastic bag only to be immediately removed and trashed without a second thought. I took a mini poll of other travellers to ask their opinion of the use of this wrapping. All (only 4 travellers) felt that this attempt to make one feel that blanket is “fresh” and “clean” is unnecessary when considering the resulting 300 bags being dumped from each flight. Perhaps there would be a less impactful way to convey to passengers that these blankets are fresh when received? Even a paper bag if a bag was really thought to be necessary?

Next each cup of hot beverage used was given in a disposable plasticised cardboard mug along with a plastic lid. I recall on flights taken in previous years where the drink could be poured into the cup received on the food tray and no plastic lid was required. Here I am considering the 300 (or perhaps multiples of 300) lids and cups being dumped from each flight. Perhaps even encouraging passengers to reuse these cups if they intend to have a second cup of tea/coffee might at least give a positive message and make passengers at least aware of the cumulative waste being generated. Perhaps a bring your own mug program could even be somehow incentivised (I know that we did on our flight and I noticed others doing this)

Next, the headphones provided to each passenger came in a disposable ziplock plastic wrap. This was immediately opened and 300 wrappers dropped/stuffed into pockets on the plane. Is this wrapping really helping anyone? On other airlines, I have noted that the unwrapped headphones were handed out after takeoff or simply left unwrapped on the seat, thereby avoiding yet another source of near-useless but highly damaging plastic wrapping.

Of course, then there was the food tray – a sea of single-use plastic. This is a more difficult one to address given the obvious constraints that airlines face in having to provide this service without adding to the service overhead for the flights. I do feel however that instead of following what other airlines have always done, there is room for AerLingus to lead the way in trying to slowly address the amount of disposable plastic arriving in each meal serving.

I did note on my flight that the second snack offered, was provided in a cardboard container without any plastic. Whether an intentional effort was made to reduce plastic in selecting this or not, I for one appreciated it.

I feel that more choices like this could form part of a concerted campaign on your part to address the amount of waste generated during flight and could be highlighted as part of a broader effort on behalf of Ireland’s “green” airline to make industry-leading efforts to be “green” in all aspects and to change the way inflight service is provided. The public relations benefit could be appreciable if AerLingus were to have an environmental impact statement with a declared intent to try to address inflight waste as well as perhaps the other impacts from the business process. I looked for but could not find any such statement online – nor could I find one for your nearest competitors either.

In fact I noted that a competitor of yours (Ryanair) was recently highlighted as one of the worst carbon polluters in Europe (not just of airlines but of all businesses). The air pollution aspect of flying is clearly a very difficult issue to tackle but I am urging you to tackle the easier and more obvious side of the inflight experience and thereby send a strong message to consumers.

You likely don’t need to hear yet another person reminding you of the effects of air travel on the environment, and as a user, I hold my hand up and will admit that I am a somewhat frequent user. But like many of us who feel we need to fly, I do think that there is a lot of scope to clean up the secondary waste stream being generated on these flights for no real gain to the consumer and perhaps at a cost to the airline (for example, time spent cleaning it up and disposal costs as well as no PR benefit).
AerLingus prides itself on its customer service and I note you are recognised for providing a 4-star service. Therefore I can understand someone making the decisions to use wrapping to add to a quality feeling that you think passengers are seeking. But I really feel this is misguided in its intent as many travellers these days are quite concerned about the overall impact of this form of transport and these methods have the very bad effect of delivering lots of additional plastic waste into our overburdened world.

I respectfully ask that you don’t ignore this request from a concerned customer and that even if you decide not to directly address these concerns (not just mine I assure you), that this concept could be taken on board and incorporated into your longer-term planning as to how you want to improve your future service. Perhaps AerLingus could take a lead that others might choose to follow.

I look forward to hearing more about what AerLingus can do to help alleviate the damage from this service in some small regard.

By the way, the image at the top is from a report about a small Portuguese airline that took the action to make their service plastic-free this year. Seems like it can be done. If this really seems trivial compared to the impact of flying itself, then think of the simple message if gives to so many people who choose to fly – i.e. the potential effect it could have on passengers thinking by simply making this statement so clearly.