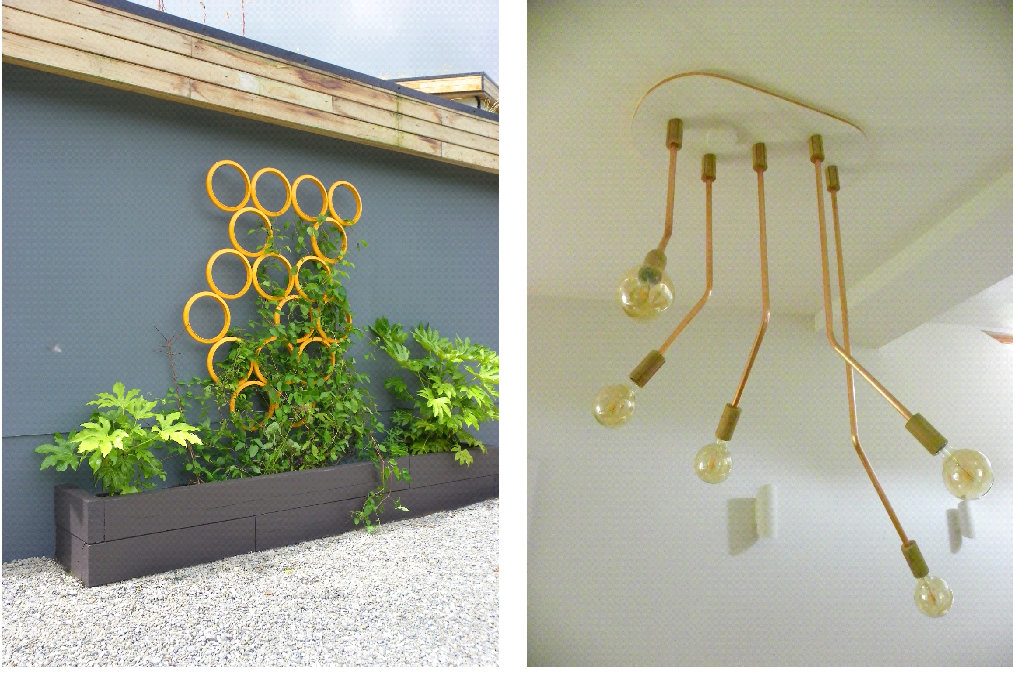 The persistent summer sunshine we had in May really stirred up the creative urges and here are a couple of things we have been making out of other stuff in the last few weeks. 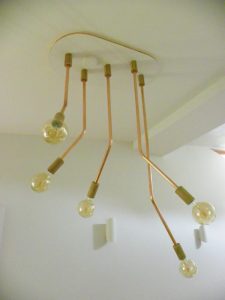 The first item – a new light fixture design – is becoming an area of particular interest and so we are continuing to try new ideas around the house made up of used odds and ends as well as some new materials. This latest addition was trying to push our design envelope a little more– both figuratively in being a bit more unusual and also physically by being a much bigger fixture than others.

The arms are made of 3/4 inch copper pipe which is quite expensive to purchase these days, but one 18ft length was sufficient for all 5 arms of the light. A recently acquired pipe bender was used to make smooth bends in the pipe with all 5 have bends being of approximately the same angle. The wooden pieces at each end of the arms were the most time consuming to make. The timber was a recycled handrail made from pine that was easy enough to hollow out using a suitably large drill paddle bit. The bulb end needed a 32mm opening to fit the E27 bulb socket snugly. The other side had a 17mm opening to fit the copper pipe snugly also, avoiding the need to any additional fixing to hold the timber in place. In designing this light, the idea was that the arms would be spaced apart and meant to look like isolated lights hanging from the ceiling and so 5 arms needed to be attached to a large base to allow them to be separated sufficiently. This base also allowed space for the wire routing from each arm back to the connection point. A router was used to form wiring channels in the back of the base and as with any large light, the base needed to be attached first and the arms added afterwards. This required a little thought about where wire connections needed to be placed for ease of assembly. Once wired in, each arm was simply push fitted into its wooden holder which was already attached to the base. 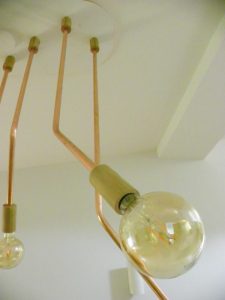 Finally the LED bulbs were selected to have the currently popular “vintage” appearance and needed to be large for this size light fixture – they are 125mm diameter 5W  “warm white” LED bulbs. Sizing the wattage was also a concern as 5 of these bulbs throw a lot of light when not contained in any shade,  even though its only 25W total output. Unfortunately they didn’t come rated any lower than 5W output.

In our particular case, with a sloping ceiling, significant effort needed to be spent with angled cuts to ensure the arms hung vertically. Without this added difficulty this fitting was easy to make and is quite dramatic in scale. 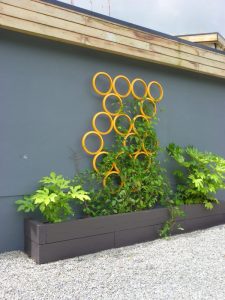 The second design idea came from a problem with a climbing plant that had to be taken down off our garage wall in order to give it a coat of paint. The old wooden trellis that was holding it up was coming apart and so the climber needed something new to cling to. You may have seen in an earlier We”Make”do post that we had plastic sewer pipe that we previously used to make planters for some shrubs. There was some of this large pipe still left over and we decided to cut it up into large 12inch rings and stitch them together to make a climbing frame that is a little more interesting to the eye.

A simple handsaw was used to slice the pipe lengths up into about 16 large rings. These were then screwed together to form the pattern you see here. A good quality primer was used, followed by a gloss coat to colour the rings – in a bright orange in this case.