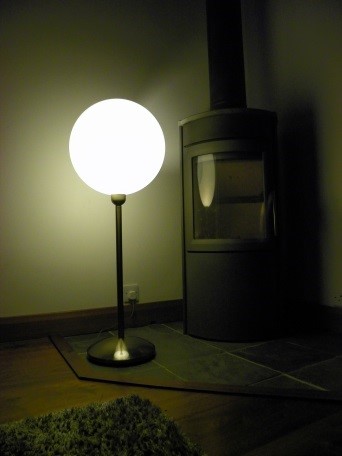 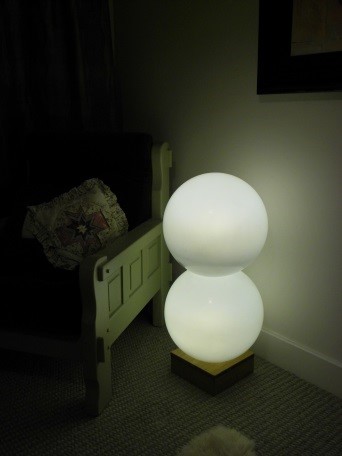 These were a great rescue from a recycling dumpster! 5 large white plastic globes used previously as old-style institutional lights (hospital apparently). We had just begun furnishing our house and needing some lamps, but had decided that purchasing them was to be a last resort. These beauties lent themselves to the two lamp designs that you see here, the second of which (lhs)also relied on a stand made from the parts of another discarded floor lamp. Total cost for these two was down to the bulbs and bulb fittings and plugs. The twin globe lamp is sitting on a bamboo plywood box made form leftovers from our “hot press” project. I put a little extra care into making this box so as to tidy up the joints and make it look appealing. There was nothing elegant about stitching the two globes together. I wanted to avoid damaging them too much in case the lamp didn’t work out and they needed to be repurposed again, so the top one is simply pulled down to the based by steel wire that fixes the lower globe in place in between the two. Again I used GX53 light fixtures and CFL bulbs which thankfully haven’t blown yet as changing them and reassembling the light will be tricky!